Learn about Viking wedding traditions, including wedding swords, blot rituals, Norse runes and spell casting, handfasting, cleansing rituals, what to wear, how to officiate, and more from these ancient Pagan marriage rites.

Planning or officiating a Viking wedding?

We’ve gathered some of the most enduring Pagan wedding customs, Viking traditions, Norse mythology, and rituals to help you create an unforgettable and truly authentic wedding ceremony.

If you’ve been asked to officiate a Viking wedding ceremony, this is a great place to start finding inspiration! You can get ordained online with AMM today and learn everything you need to know to plan and deliver a personalized ceremony.

Next, head to our Wedding Ceremony Script Library and explore sample Pagan and Handfasting wedding scripts.

Plan your ceremony on a Friday and get ready for a long weekend! Once called ‘Freya’s Day,’ or 'Day of Frigg,' Friday is all about Freya — the Norse goddess of marriage, also known as Frigga or Frigg. This badass babe is said to bless a happy union held in her honor with many years of love and a houseful of healthy children.

Although Viking weddings used to be planned only for late summer through early winter because treacherous northern weather made it difficult to travel, modern Pagan couples no longer need to steer a longboat through frozen waters, and can schedule their date for any season.

Time for a spa day…  Long ago, young Viking couples took part in a deeply symbolic bathing ritual the day before the ceremony in order to wash away the innocence of youth and welcome adulthood. The pair was sent to separate rooms and immersed in warm soapy water by their married friends and relatives. While being soaked and scrubbed, they were offered tips for success in the bedroom, advice on avoiding arguments, and other candid suggestions for a lasting marriage. After they’d been purified and adequately advised, the soon-to-be-weds were plunged into a pool of cold water prepared with aromatic herbs and oils that left them refreshed, fragrant, and ready to wed.

Modern Pagans still follow these bathing rites, but today’s symbolic soaks are usually held at spas and natural springs, and are less gendered affairs than in centuries past. 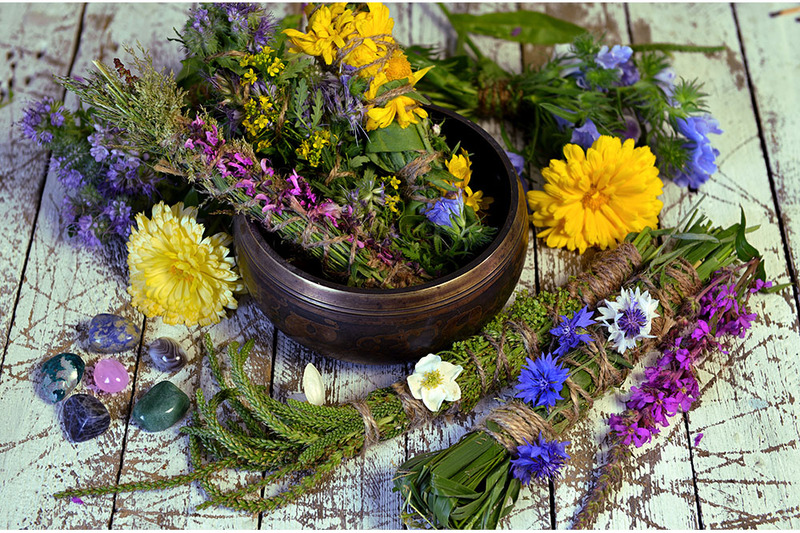 Flowers, herbs, stones, and crystals are used to prepare the body and spirit for the wedding day

Hairstyles are a big part of traditional Viking weddings. While this fact might surprise you, historians tend to agree that how a bride or groom styled and adorned their hair was even more important than the clothes they wore.

Brides left their hair long and loose for the ceremony, or else tied it up in elaborately stacked braids, and Viking men prided themselves on clean, combed, and styled mustaches, beards, and hair. Modern Viking brides wear a silver crown decorated with flowers and jewels, said to represent the step into adulthood. Sometimes, these crowns are made of woven branches and straw instead, resembling Wiccan head wreaths.

Although Viking couples spent most of their prep time styling those long luxurious locks, they still dressed up for the big day. Wedding attire is said to have been a mix of bold reds, forest greens, and ocean blues, accessorized with fur lined cloaks and tunics and (of course) the occasional axe. Wedding officiants usually dress to match whatever style and level of formality the couple’s chosen. 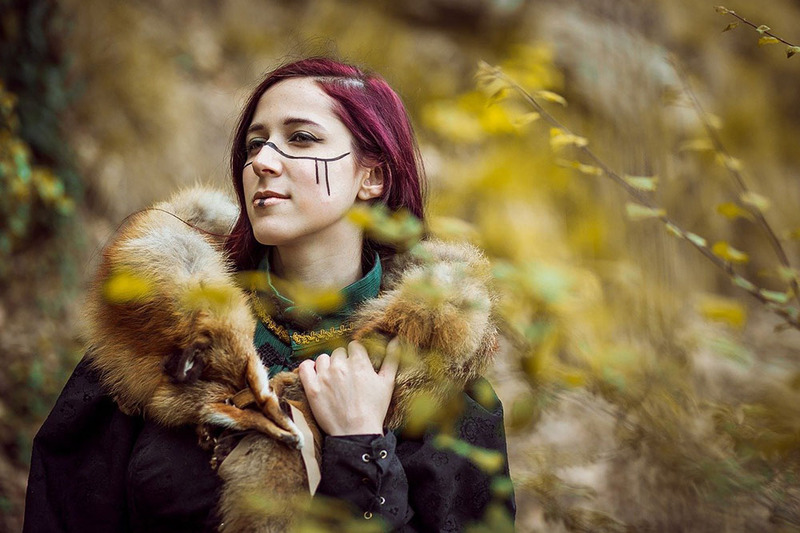 5. The call of the hunting horn

Viking weddings are traditionally officiated by a Pagan priest or priestess, known as a Gothi, Goði, or Gyðja, or by a trusted friend or beloved elder who has been ordained for the occasion. These honored officiants are known to call guests to the ceremonial site with a few bellows of a hunting horn, sending a deep melodic tone echoing through forest and field to signal the start of the marriage rite.

Speaking of forest and field — Viking weddings are a natural fit for the magic and majesty of the outdoors. Be it forest or lake front, back yard, ocean shore, or field of wildflowers, an outdoor wedding ceremony invites spirits and gods and the blessings they bring.

Many modern couples choose to leave the decorating to Mother Nature (or Jord, Jörð, the Norse goddess of Earth) and don’t bother with elaborate altars or archways. Others give her a helping hand, decorating the ceremony space with seasonal foliage, flowers, candles, and other natural elements.

Viking couples exchange swords as part of the conventional ring exchange, to represent the protection and care exchanged between two families in marriage. Although not all historians agree on the more scandalous details, some say grooms once stole their wedding swords from the graves of ancestors, to prove they weren’t afraid of their own mortality. During the wedding ceremony, a couple’s wedding bands are attached to the hilt of the swords, tied to either the pommel or handle, as a symbol of trust and partnership in love. 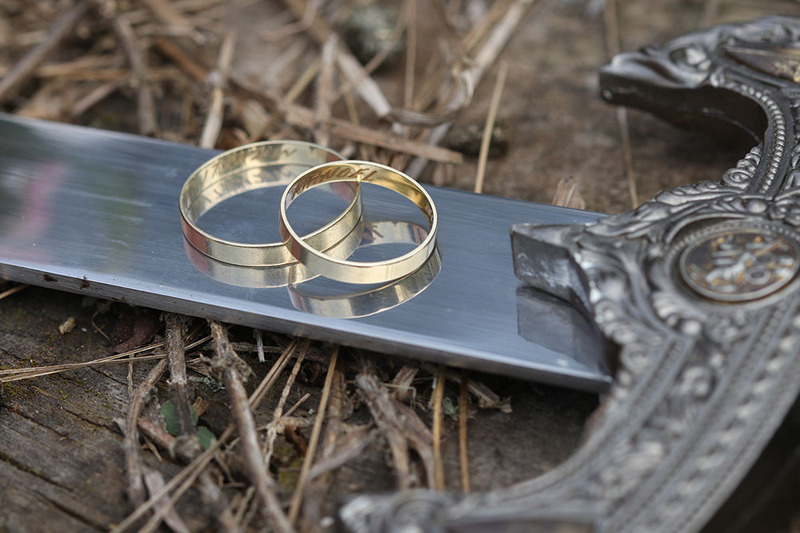 In ancient times, blood sacrifice was a common part of religious and spiritual rituals like marriage, such as the ceremonial slaughter of a goat as an offering to the god Thor to bless a union. Modern Pagans have found ways to keep the blot ritual tradition alive — with a vegetarian-friendly twist. Modern ‘sacrifices’ are often done with mead, wine, or whiskey in place of blood, and are otherwise carried out in the same way: The offering is poured into a bowl and blessed by the priest or priestess officiating, and then sprinkled over stones or elements symbolizing the gods, and across the couples’ foreheads.

Handfasting is a popular addition to any Pagan wedding, including Viking weddings. During the handfasting rite, the wedding officiant blesses the couple and ties a ribbon or cord around their hands and wrists to symbolize an unbreakable spiritual bond, sealing the love spell cast by the vows. Handfasting cords can be tied in decorative knots, such as an infinity knot, and displayed in your home for years to come as a happy reminder of the wedding ceremony. 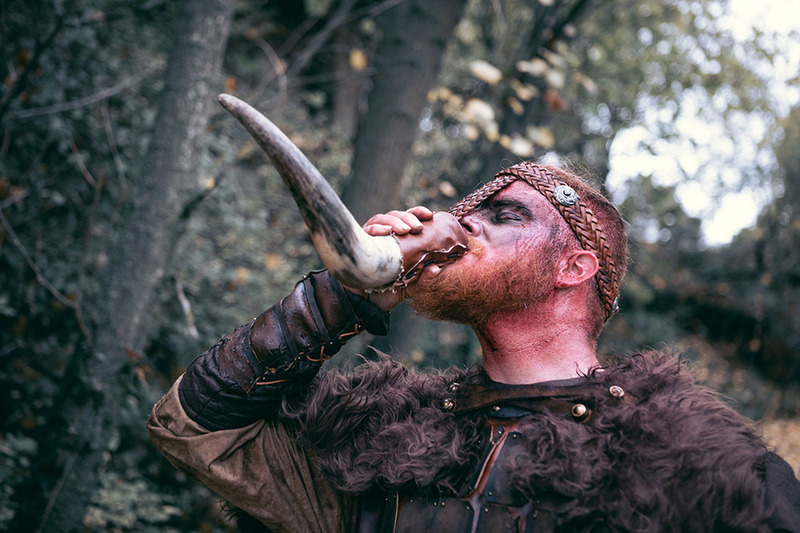 Did someone mention mead? You bet they did! Viking weddings both then and now are known for lively drinking by the barrel-full, playful mock sword fights, and feasting that lasts for days. The traditional Viking wedding toast is always honey mead, followed by epic feasts that can last up to a week or more, and nights filled with live music and enthusiastic dancing.

Norse runes are as beautiful as they are functional! Called the Elder Futhark, this old runic alphabet is thought to have become popular in the first and second century A.D. Each rune holds a specific meaning and symbolism, and modern Vikings and other Pagans place these symbols on wedding bands, wedding altars, and invitations to bless the union and cast spells of protection and strength. 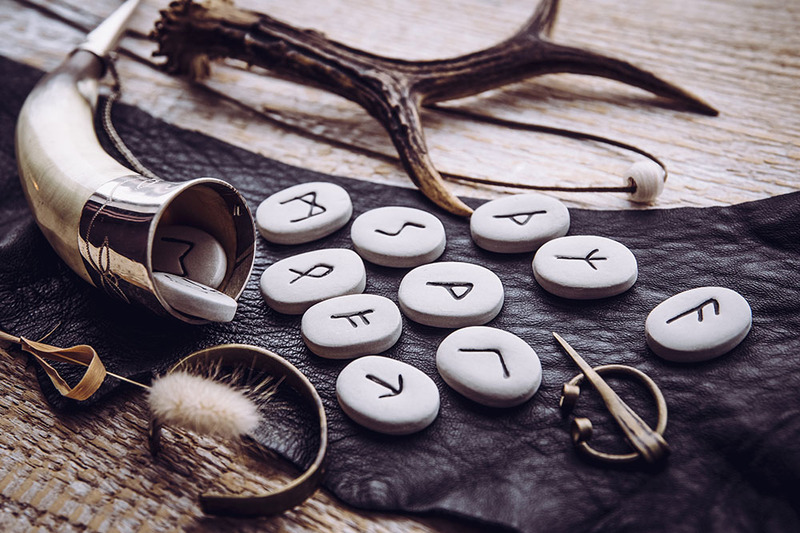 Norse runes are used for decoration, storytelling, and to bless a marriage 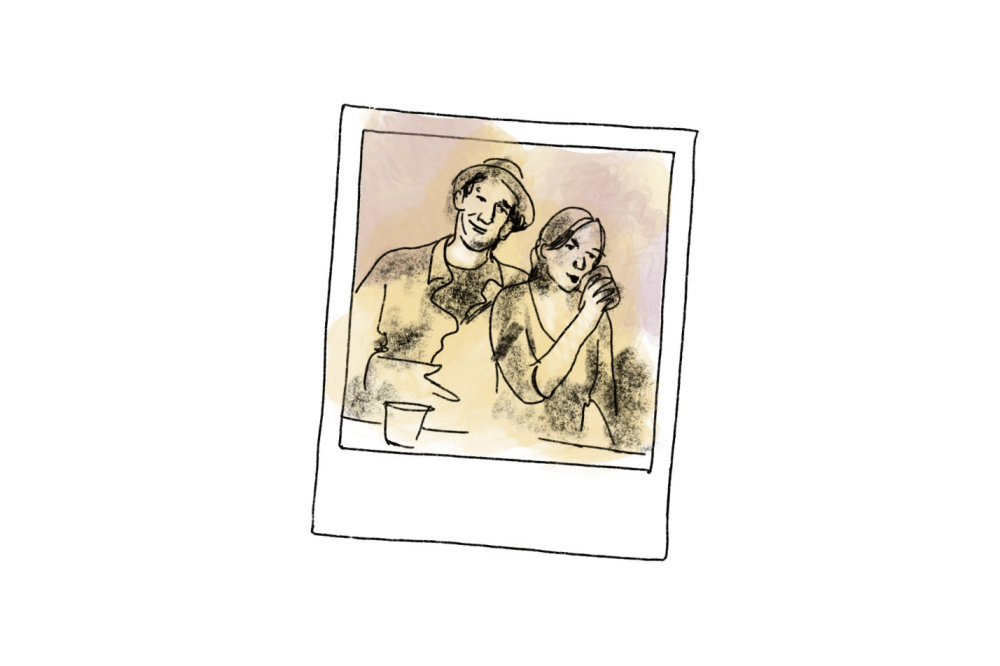 Love til the Last: Helping a Dying Groom Marry His Soulmate 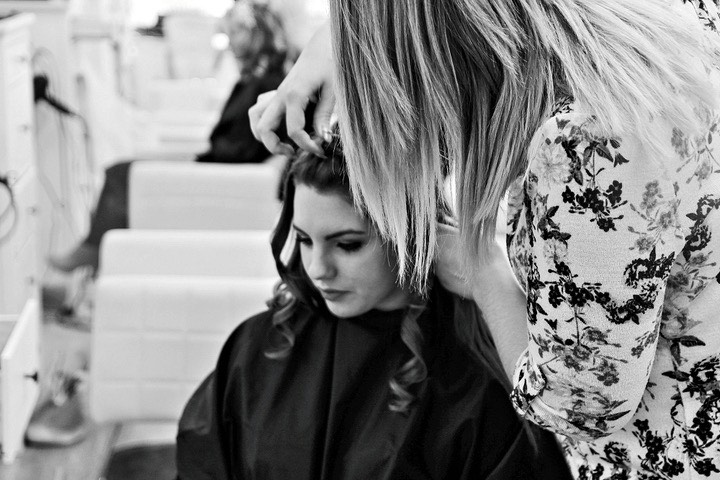 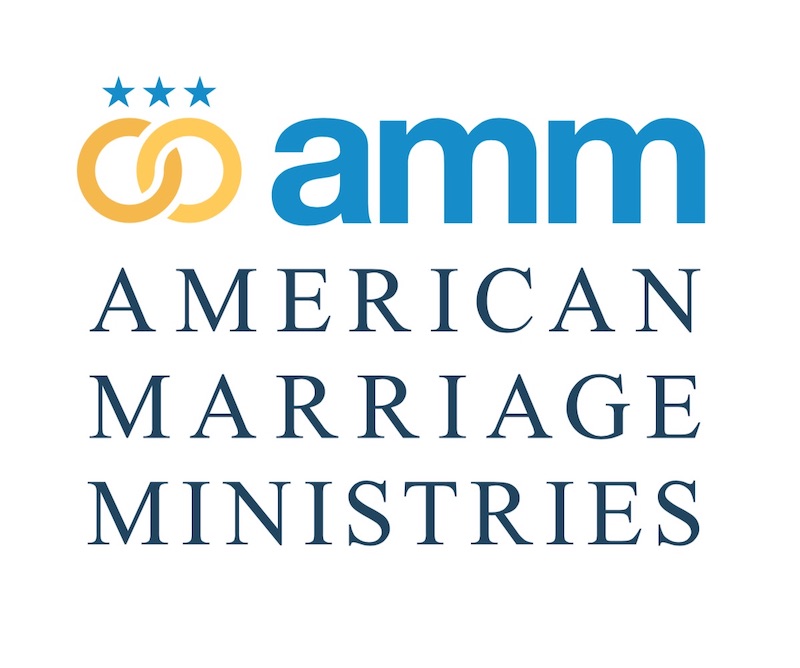 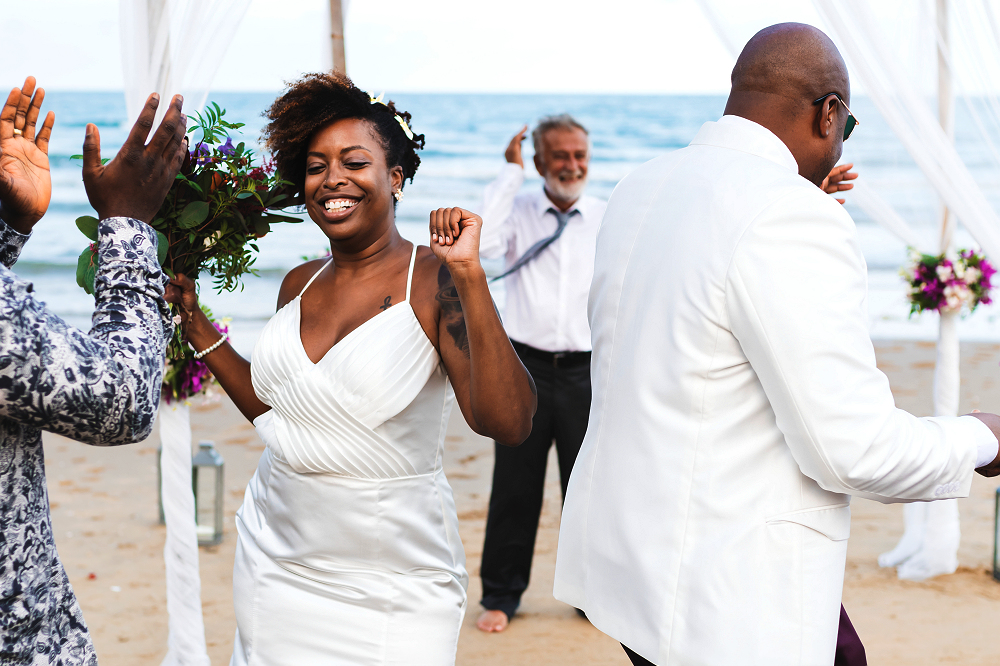 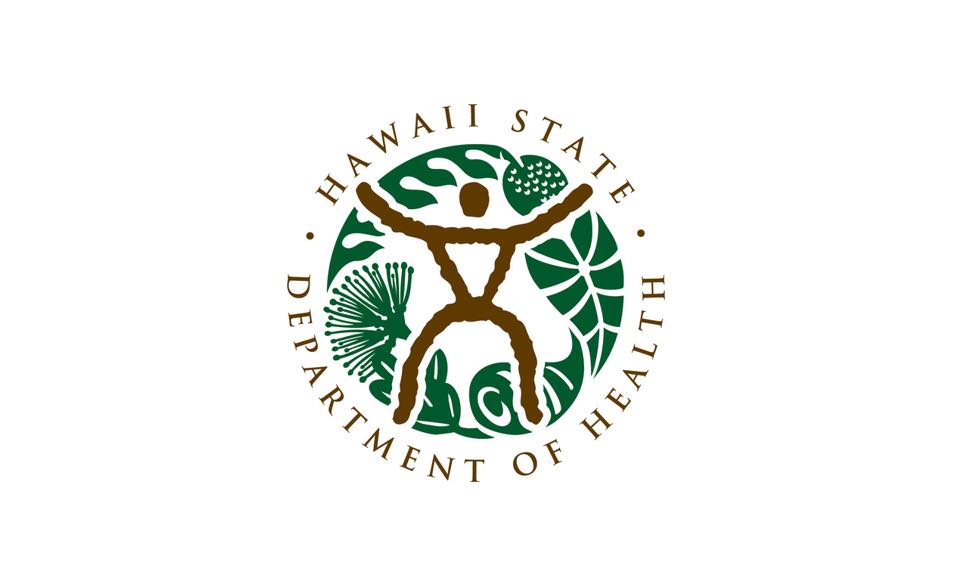 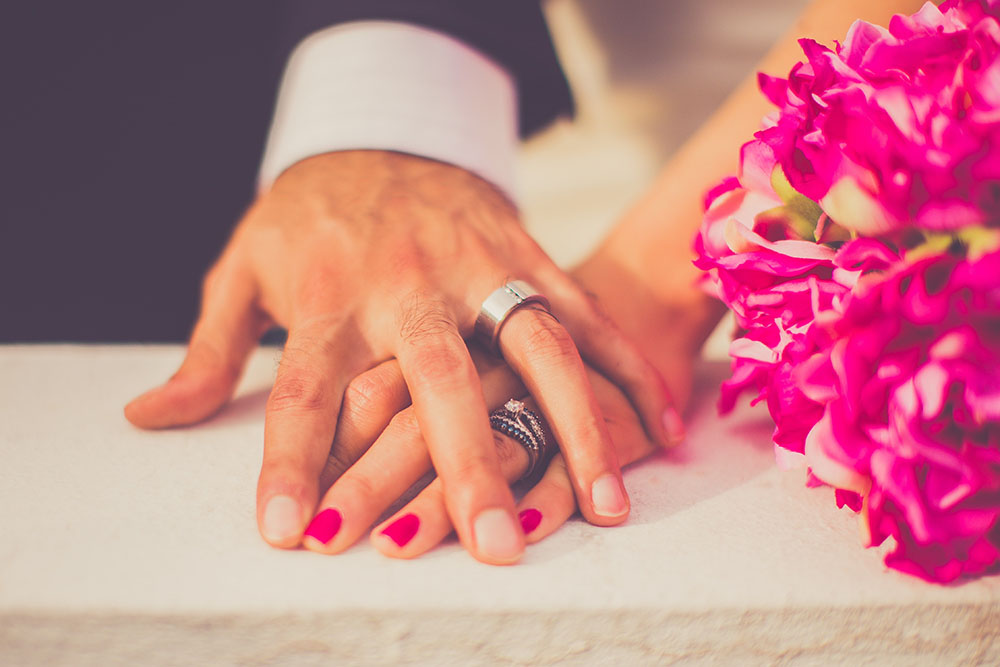