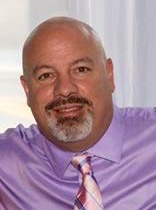 Joseph A. Pezzutos Weddings: 2
GET ORDAINED
WITH AMM

I was raised by 8 loving sisters. I lost my mother when I was 9 years old. My dad tried raising us the best he could by himself it was tough times raising 9 kids on one income. I consider myself a survivor of sorts as a child learning as I went along. I was a Catholic Alter Boy, and Eagle Scout, as well as learning how to be a contractor with my Uncle throughout my teenage years to keep me out of trouble. Being raised as a Catholic most of my childhood I found Jesus Christ when I was 18 and all my sisters introduced me to Christianity. The fog of an catholic upbringing finally was lifted and The word of The Lord and The Holy Bible made a lot more sense to me then what I was forced to learn as a child. I accept all people no matter who they choose to worship. I am not here on earth to JUDGE anyone, that is up to your maker. After high school (1981), I joined the United States Air Force and was responsible for millions of dollars worth of aircraft at a very young age. I made rank quickly raising to Staff Sargeant (E-5) when I was just 24 years old. I went on to become an Airport Operations Manager Overseas and the United States of America while serving my country. After the Gulf War was over I decided it was time to try Civilian life, and get paid for all the free hours I was working for Uncle Sam (1992). I immediately went to work for Federal Express as a Customer Service Operator then as a Courier before leaving to my final job. In 1993 a job opportunity became available out of no where and I was looking to support my wife and three small children. I worked as a Railroad Conductor in the State of Pennsylvania for 17 years before injuring myself and no longer able to perform as a Railroad Conductor any longer. I have been Disabled since 2011 trying to get my health back after all my surgeries and the rehabilitations that followed. I recently found a job where all my years working with the public fit my skills. I am now an Independent Evaluator for major businesses. It works for me and the amount of income I can earn while being disabled. Some days I am better then others , but with the good Lord's help everyday I know each day will get better. In the meantime I thought I lived a long and interesting life. I though with everything I've been through in life since I was a child maybe just maybe i could help someone as a minster.

Joseph lives in South Carolina and was ordained by American Marriage Ministries on August 21st, 2016.

Joseph is an ordained minister of American Marriage Ministries. You too can also get ordained as an AMM minister. With our free online ordination you can perform marriage in your state or anywhere else in the country.