GET ORDAINED
Home › FAQ INDEX › I saw this website saying you may not be legal. What is that about?

I saw this website saying you may not be legal. What is that about?

You may have seen the site "www.americanmarriageministries.com" if you typed "American Marriage Ministries" into Google. This site insinuates that our ordinations are not legal, but that is not true. Our ordinations are legal.

Our Church and the ordinations we administer are protected by the religious non-establishment clause of the 1st amendment of the Constitution of the United States of America. That protection applies to us and every other religious institution in the US. In other words, our ordinations are as legal and valid as those held by the Billy Graham, Joel Osteen and Dr. Martin Luther King Junior. It’s the law!

For years we have pursued a strategy of not responding to this website because:

That being said, this website now has visibility in Google's search results for "American Marriage Ministries". As such, there is now a need for an official response.

We take the credibility of our organization and the legitimacy of our ordinations seriously. That is why we filed for and were certified as an IRS 501c3 Charitable Non-Profit. To our knowledge, no other church offering free online ordinations is officially certified by the IRS. We work closely with government offices across the country to ensure that our ministers meet all required registration requirements as wedding officiants. As such, we believe that we offer the most robust and applicable ordianation available online.

Doing what we do, there have been times when elected and non-elected government employees have challenged the legitimacy of our ordinations and our ministers rights to officiate wedding ceremonies. It comes with the territory.

Time and again we have risen to the challenge, advocated for our ministers, and protected their right to perform marriage.We have always won, the courts have always recognized our valid legal ordinations, and to date, no wedding has been annulled for this reason. That false website, "www.americanmarriageministries.com" is actually an example of a case where the courts recognized the rigths of our ministers, but the copy has been edited to hide that important fact.

American Marriage Ministries used to be located at the domain "americanmarriageministries.org" however we chose to migrate to a shorter domain name, "theamm.org". We naively let ownership of the old domain lapse and it was purchased by a competing organization.

In 2013 we noticed that the domain redirected to "www.themonastery.org". 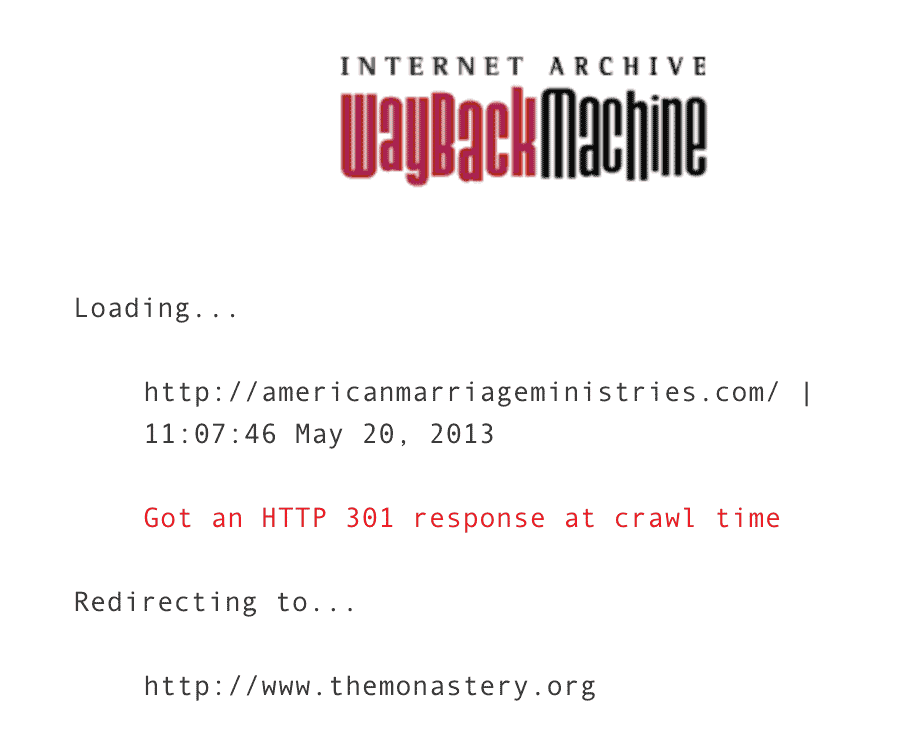 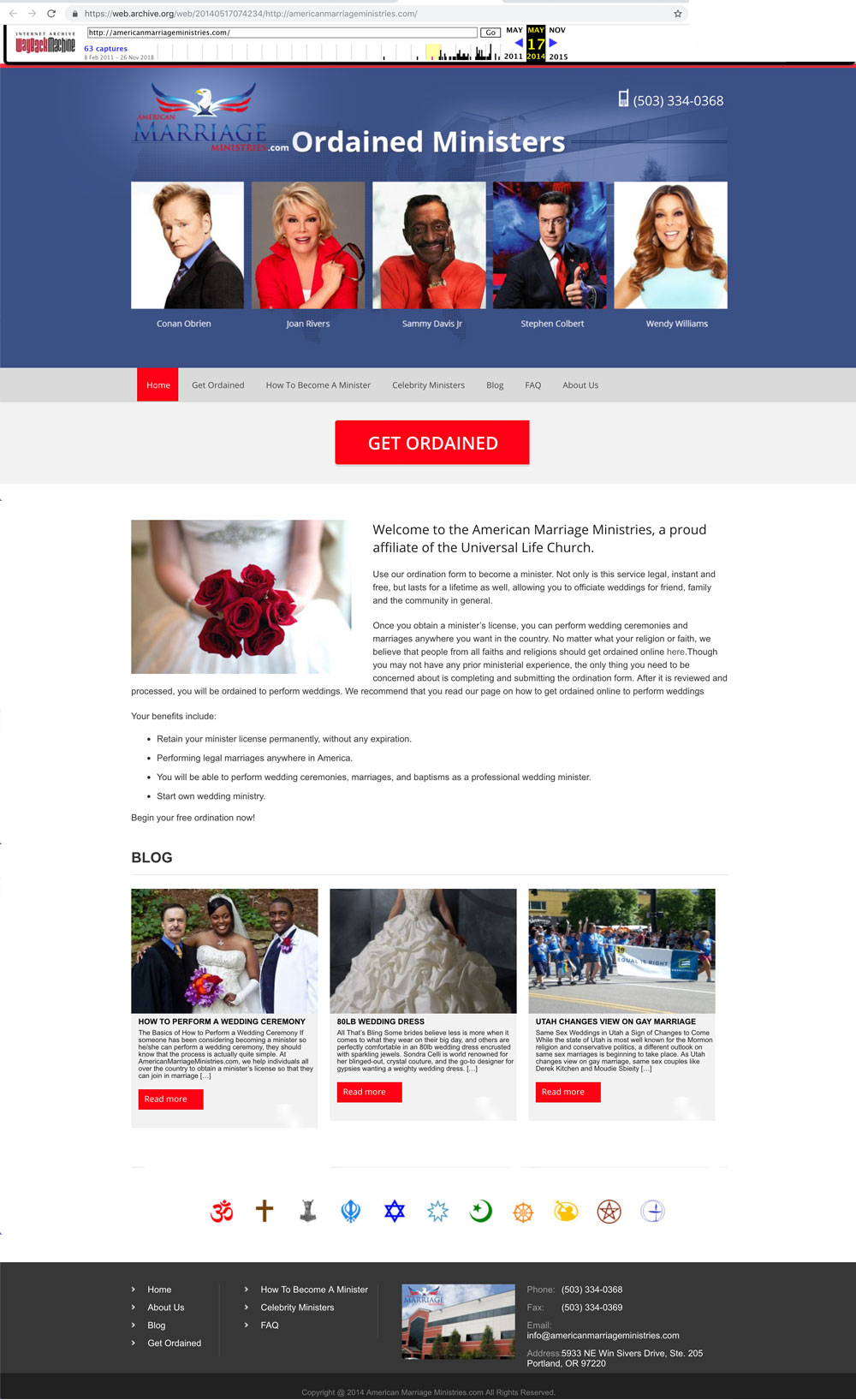 We pursued legal action against this website. It was eventually taken down. The individual responsible however suffered no serious penalties and retained ownership of the domain, to the best of our knowlege.

Many months later the website was back online, more or less as it exists today. It was carefully crafted to undermine the credibility of our ordinations while not saying anything explicitly libellous. For example, the title claims "May Not Be Legal" not "Is Not Legal". These claims are patently false, especially in the context of the case cited.

The nature of the work we do at American Marriage Ministries is empowering to the individual and socially disruptive, similar to services like Air B&B, Uber, Rover, etc. Encountering cultural friction is built into pursuing our mission. Creating doubt, even if it is baseless, can be highly effective in damaging our credibility, even if that involves deceiving the public as this fraudulent website does.

We understand that the person officiating the wedding ceremony and the couple wants to be 100% sure that the marriage is legal. We at American Marriage Ministries do as well. Insinuating that our ordinations are not legal by misrepresenting facts is a malevolent action more fitting of political attack ads. We are distressed that this sort of deception is occuring in a space where couples and their ministers should be celebrating joy and love.

The website that casts doubt on our ordinations cites a letter from a retired Washington DC judge, Hon. Curtis E. von Kann that was written in response to the application of one of our ministers that was subsequently approved to perform marriage in the District. 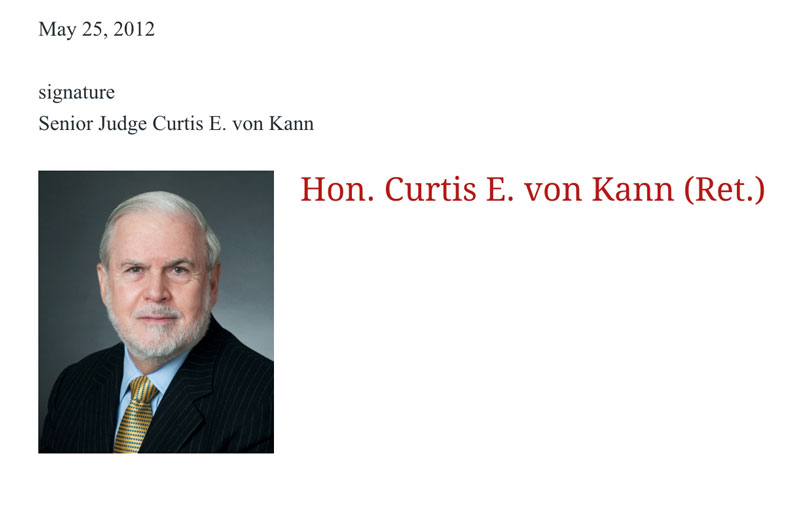 Regardless, this non-legally binding letter was written and subsequently used on this website to give the appearance that our ministers are not recognized in Washington DC.

There was a time when the DC Marriage Bureau was inconsistent in recognizing the rights of our ministers. This letter is from that time period. American Marriage Ministries lobbied on behalf of our ministers and threatened legal action due to the arbitrary registration procedures and violation of the 1st amendment.

At the time the judges receiving a minister's application could approve or deny their right to perform marriage based on the judges personal biases and not on District or Federal law. American Marriage Ministries was successful in our efforts and the DC Marriage Bureau then modified their application procedure to recognize the right of all AMM ministers to perform marriage.

Since the policy change we have not had a single issue with the Washington DC Marriage Bureau. Our ministers successfully register with their office on a weekly basis.

If you want to verify the rights of AMM ministers to officiate weddings in Washington DC for yourself, you can contact the Washington DC Marriage Bureau and confirm with them directly that you as an AMM Minister can perform marriage in Washington DC.

Home › FAQ INDEX › I saw this website saying you may not be legal. What is that about?
GET ORDAINED
WITH AMM